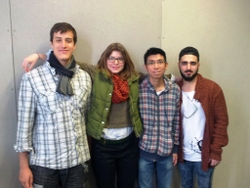 We took a group photo after the final presentation on 14 th May 2014. As you can see we are all happy for what we have done and learnt so far and we have become good friends ! 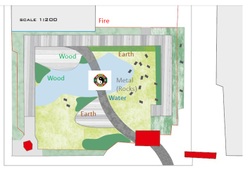 Feng Shui is an important tradition in Chinese Architecture. It has a close relationship with the five elements and the Bagua, the metal, the wood, the water, the fire and the earth, which can be represented by the actual element itself or by different colours.

In our garden design, we try to cope with the idea in order to have a good feng shui. We have a large red wall with yacht drawing on the north, we put metal (Rocks) in the east, And water surrounding the central pavillion, circulating around it. We have wooden cantilevered platforms, ginkgo trees and bamboos in the west side of it.

Aside from that, we decided to keep the car park, inwhich we can allow the restaurant owners to park their luxury cars and show their wealth!

A Perspective of the new garden was done on 12 th May 2014. The centre Pavilion, the side wooden corridor and the cobblestone road is captured in the perspective, designing under a traditional Chinese style. 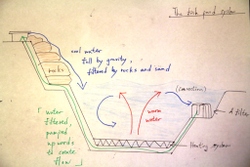 Water services are often expensive and not easy to maintain.We have confirmed that there is a water supply pipeline system neat the Faulkner street, so the water supply for the fish pond is not a problem.

However, water features are expensive for maintenance and they cost problems when it is not running. For example, if people lit on it and rubbish would cause hygienic problems and bad smells, which is highly to happen near the restaurants.

Apart from that, running water is also less likely to freeze in winter as the water particles are more dynamic.

In order to lessen the problem, we need to keep it running and select fishes that represents good fortune and live in fresh water Arowana, Flowerhorn and Asian gold fish are some good choices.

It is not easy to keep the water flowing by itself, as this causes energy. Mechanical systems like pumps and jets can be used in keeping the water moving. Grass and vegetation can be planted at the sides of the pond to prevent soil erosion from happening. This can lessen the effect of evaporation on the pond and prevent it from drying. Water can be directed by an underground piping system, to the bottom of the fish pond,to keep the water warm enough for the fishes to live in winter, as Manchester has a pretty cold winter. Warm water would rises up to create a convection current in the pond, which also keeps the water circulating. 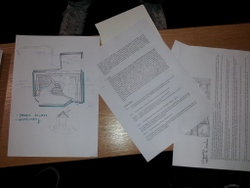 Group 1 discussing the layout of the park on 7th May 2014. At first, we suggested to build a fish pond at the centre of the garden, where water symbolizes life, and it is important in a Chinese garden. 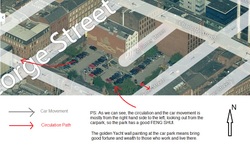 China Town is located at the centre of Manchester. After a site visit, my group agreed that the major problem of the site is the car park at centre. It has some Chinese features, for example the wall linings, the two pavilions and the pai fung, but they are not very well organized. The circulation of the area is unclear and the space is not well defined. We decided to keep 10 cars parking spaces, and change the car park into a green space, a Chinese Garden, right in the centre of the city, as a landmark and a place that locals and visitors can relax and experience the mix culture of Chinese and British.

In Feng Shui, a house is like a human body. Designing a house is like building up a healthy body. The rooms are like our organs, which serves different functions. The circulations are like our blood vessels, which links the organs and carry blood and nutrition to feed the organs. When everything is in harmony with nature, we are going to stay healthy and happy living in the house. 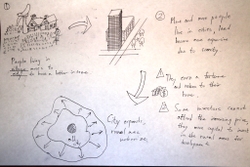 Before the start of this event, we were told to read 5 essay about urbanism, global warming and fresh water issues in the world. As I am from Hong Kong, there is one essay that particular interests me. It stated that Hong Kong would be reclaimed by the ocean in 2048, That is quite alarming, however, I do not believe that we can turn the tide of global warming anymore without significant technological advancement. As well as we are still living in the cities, we cannot avoid urbanism. It is not only an environmental issue, it is also an economic development process. We cannot reverse the process anymore, but we still can act immediately to slower the effect, in order to have more time for our scientist and engineers to solve the problem.