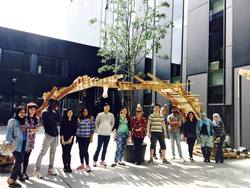 Day 6
The project was finished, and the exhibition complete! A video installation and posters informed visitors of the aims of the project and how it was achieved, and the mushrooms were hung from the frame. The mushrooms havent yet grown from the mould, but overall the project was successful in that everyone got to contribute to the designing and building process, and could grow their very own part of the overall project. I thoroughly enjoyed the project MushFarm, and I am impressed with the outcome of the team to create the functional and beautiful installation. 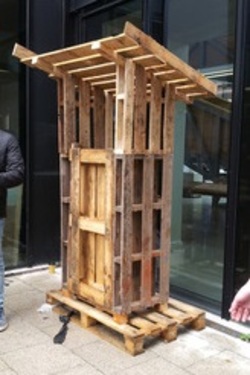 Day 5
The exhibition was discussed for the mushroom farm, and was decided there would be a looping film on display to show the process of building the farm structure, with posters explaining the concept of the project, the trip to the Biospheric Foundation that gave inspiration to the idea of recycling materials to create food, and how the mushrooms were grown. 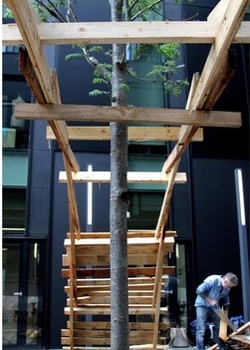 Day 4+
The building process of the structure was started and finished, and the pallets were separated into single planks and made into an arc. These single planks were drilled together in two arc halves, and connected at the end to create one large arc that utilised the tree as a central organic figure. 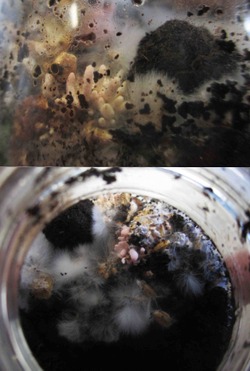 Day 4
The mushroom bottles are beginning to grow white fungus-mould across the surface! These will soon be ready to slash open and spark the fast growth of mushrooms from the mould. 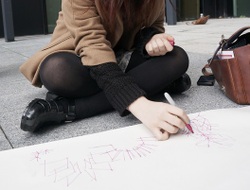 Day 3+
We settled on the idea of a large arching build, that utilised the tree as a central point and would have an organic and beautiful curve to it, to allow the mushroom baskets to be suspended. This could also be sat on either side, with the idea people could walk under the arch to pick mushrooms, and relax and eat them upon the side-benches. 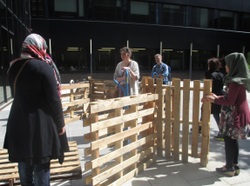 Day 3
We imported the pallets and began brainstorming group ideas of how to put them together. (draw some quick plans of some ideas). Ideas included a cantilever, hanging mushrooms, stacked piles of crates, curving around the floorspace, seating or steps, ect. 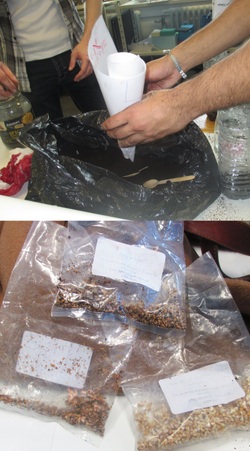 Day 2+
We began planting the mushrooms. We layered them within recycled coffee grounds in plastic bottles, utilising waste products, and watered the coffee. We put the lids on lightly so as to allow a little air to the bottle, spurring the growth of (hopefully) white mould across the coffee. 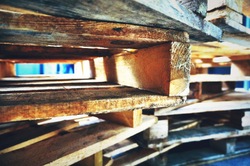 Day 2
Changes in plans had us revising the original idea of using recycled tesco green plastic crates to using recycled wooden pallets, which were more readily available. Due to this change there were fewer units of material to build with, so the groups merged to make one big farm rather than three individual ones. 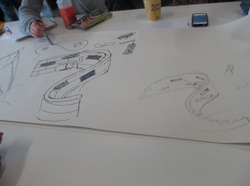 Day 1+
We got split into three groups of four, and each group could design a build for the farm. We spent the day brainstorming and sketching ideas on how to make this farm. 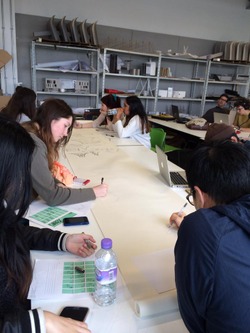 Day 1
We met the team and got told the brief for the farm: We would be utilising waste products (in this case local used coffee grounds) to grow mushrooms from it  we would put the seed in the grounds, water it, keep it under minimal ventilation until the grounds grew mould. Then the bottles would be opened, and the changing atmosphere of air would spurt quick growth of edible fungus. These bottles would be displayed on a farm we would design and build from recycled tesco crates.