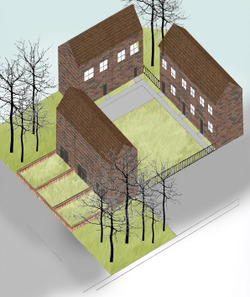 In the last session we delivered our final presentation to everyone. The presentation was successful. Our proposal had got some positive feedback which was inspiring. The other three groups' presentations were very inspiring and impressive to us. After all the hard work, we were treated some delicious cakes to celebrate the succeed of this event we have all anticipated in. 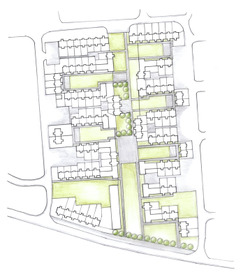 The finalized plan of our proposal. We decided to make the most of the space obtained after removing all the fences, and make them into semi-community spaces where residents living around the spaces own them.

Diagrams we made while brainstorming for our proposal.

We decided to focus on a small street in Sale, where there was tall fences on two sides of it. We wanted to remove all the fences in order to maximize the community space. 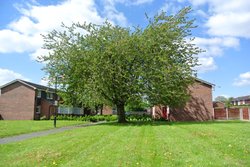 Session two
In the second session we visited the Sale community centre. We walked around the site where we will be focusing on in later tasks. After that, we each delivered a presentation of our chosen neighbourhood to people from Sale. We were also split into groups of four to work together on future tasks. The task of my group was to focus on social cohesion. We need to find precedents that fit within our theme and analyse the constraints and opportunities of implementing these within the Sale estate.

On 30th April we had our first meeting for event 24 For Sale. We were given the first task that was to locate a neighbourhood within Manchester, and to find out what makes it a good neighbourhood.
The site I have chosen was Hulme Park, located in Hulme, Manchester. The park provided path for jogging and cycling, and there were facilities for skating and stretching. Their was also a playground which was well used by children either living or studying nearby. The park was easily accessed by car and by foot, as it was bounded by roads.