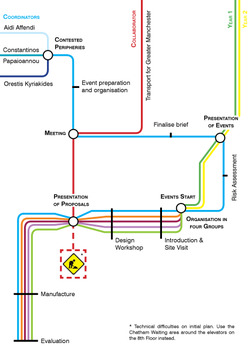 The Event: organisation and development
This diagram provides an overall view to the Event. It follows the process behind the development of the initial brief in January, as well as the way all actors interacted with each other through the duration of the last five months.

Day 6: Install. The groups have placed their interventions in the space in front of the elevators on the 8th floor of Chatham hoping to redefine the waiting moment for the hundreds of students using the elevators every day in Chatham. The reactions of people were recorded and they then evaluated the success of their proposals.

In the photograph you can see Krasimir giving some final touches to the intervention by group 2.

Day 5: Manufacture. Following some problems we had with our initial site each group will install a sample of their proposal in the space in front of the elevators on the 8th floor of the Chatham building. The groups are making preparations.

Day 3: Presentations. The groups presented their proposals to our collaborator (Transport for Greater Manchester). Our collaborators were impressed with the design disciplines behind each proposal, while providing feedback and useful information on health and safety issues concerning designing in public spaces, and especially train and tram stations. 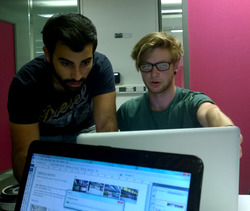 Day 2: Design workshop. Each group developed their ideas with the aim to reach a proposal that would be responsive to the site, buildable and financially viable.

Day 1: Introducing the brief, the aims and the structure of the workshop to the first and second year students. Following the introduction, we visited the site and had an initial brainstorming session within four groups of 3-4 persons each.