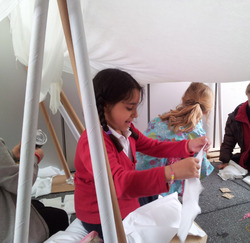 DenCITY!
The dens came along really well, and it was really interesting to see how the children put them together, and then used them. 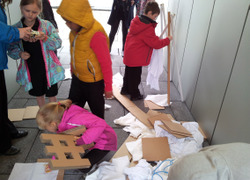 Den building!
Finally it was the day to build the dens! Unfortunately the weather didn't permit us to be in cathedral gardens as originally planned, so we took to the roof terrace at Uni. The children first were split into 4 separate groups, and started off by picking all the materials they wanted to use to make the dens.

Animation!
Today we took the children's drawings that they had done yesterday, and created stop motions out of them. We will present these to the children tomorrow as a starter for the day. 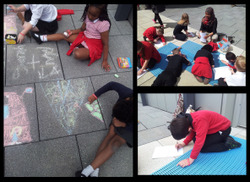 Drawing!
In the afternoon, as it was a sunny day, we took the children onto the roof terrace. We gave them all different forms of drawing materials and gave them the oppurtunity to draw on paper and on the floor, pictures of what their dens may look like, or what the aliens could look like. 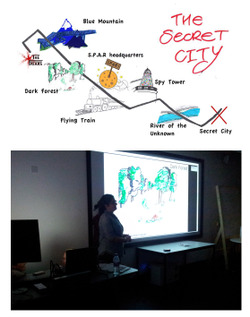 Meeting the children!
After we had come up with the two separate stories, together with the collaborator, PLACES, we came to the conclusion that the best thing to do would be to join the two stories together.
When the children came to University, after giving them a tour of the art school which they seemed to enjoy, we present the story to them and introduced the idea of having to make a den. 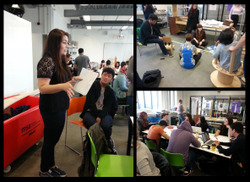 Day 1:
On the first day, we met up and had to come up with stories that would form the basis of the reason the children were making the den. We came up with two stories, one based around a secret city, and one based on aliens.