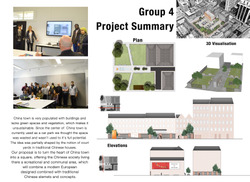 We presented our project and got feedback from Edward Fox and Dr. David Haley. 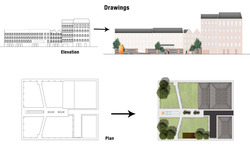 I was assigned the task of making the technical drawings for the project. I started by drawing the context and then our vision in plan and section on AUTOCAD. Then I further edited them in photoshop. 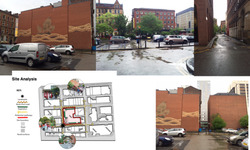 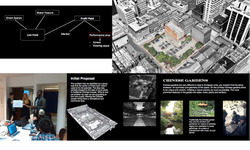 My Group chose the car park as our primary site. We felt it was not used to its maximum potential as a car park and quite frankly wasn't needed at all. We decided to turn its function to that of a park that serves the surrounding businesses, kind of like a centre within the centre of manchester.
We also looked precedents to aid our design process. 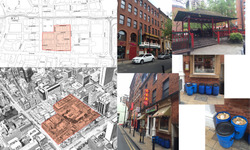 Site Visit: China Town, Manchester.
After getting spilt into four groups, we ventured out into chinatown to observe the area. Restaurants, Massage parlours, nail and hair salons and night clubs were the most prominent features of the area. 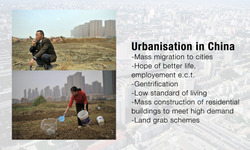 An Essay on Chinese Cities
When we look at China, it is impossible not to notice the urbanization of the nations cities. Just over 680 million now live in cities  51.27 per cent of China's entire population of nearly 1.35 billion. (Telegraph, 2012)
The majority of this move has happened in the past two decades as a result of the response to the boom in economic opportunities. People seeking for better job opportunities and higher pay; the migration from fields and modest homes to office and high rise apartment blocks. This is similar to that of Manchester, in the 1800s. A period marked for the rise of the Industrial Revolution. Large numbers of people migrated to Manchester for the hope of better life, better jobs, but the reality of the situation was different: bad and expensive accommodation, houses with no heating, poor hygienic environment; all in all very poor standards of living. China on the other hand is dealing with the problems that urbanization causes. There have been a massive drive to provide good housing, health and education facilities in the cities. However, the rapid modernization and demand for improved living standards is pilling extra pressure on the society and the already blighted environment. Many of those settling down in urban areas are migrant workers  people moving from the country to cities to seek economic empowerment.

The influx is seen as having a destabilizing effect on urban society, according to experts. Unfortunately, government policy has not been updated, so migrant workers are still classed as rural residents. The outdated Hukou housing registration system ties migrants to their hometown and this means they only have access to benefits back in their local towns. This brings about very little to no social security and results in most migrant workers being treated as lower-class citizens.

Along with urbanization comes the process of gentrification.
Gentrification is a shift in an urban community toward wealthier residents and/or businesses and increasing property values. Gentrification typically occurs when the government open up the ties with private companies to help spur economic development and attract business all with the aim of tackling urbanization.

The negative effect of this is that a lot of migrant workers are forced to stay in the cities even with very poor wages and standard of living because their farms have been taken from them by land grab schemes. These large corporations are merciless in the execution of their schemes, they capture land owned by the farmers and build insensitive structures therefore displacing the original tenants.

Another effect of urbanization is climate change. Industries are using more energy and in turn burning fossil fuels. It is estimated that in 50 to 100 years, coastal cities will be affected greatly but rise in sea leves including chinas richest province- Guandong.
It seems unrealistic that technology will be able to cope with the sheer danger of climate change. It is anticipated that when south east Asia is affected by changes in sea level for instance, the rich will migrate leaving the poor to face the problems. Its amazing that the capitalist society we live in, the rich create the problem and leave the poor overwhelmed in attempts to solving them.


Images added as part of the essay to illustrate ideas.